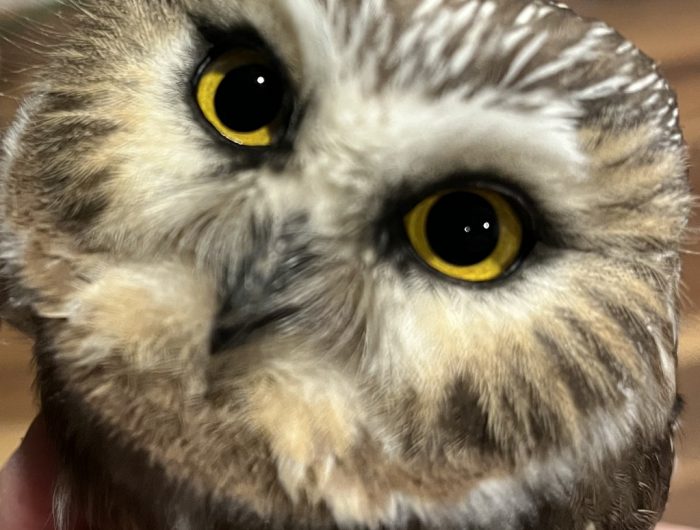 Up close and personal with the saw-whet owl

The call of the northern saw-whet owl is described as toot-toot-toot and can go on for hours.

One reference describes the call as incessant. I used to think that this breed of owls got its name from the sound a crosscut saw makes as it works through a tree trunk.

But I recently read that its call is more reminiscent of the sound made while sharpening such a saw by hand with a whetstone, one saw tooth at a time. That makes more sense to me.

I first heard a saw-whet in July 1999 on Brier Island, Nova Scotia, Canada. I was on a birding trip with a couple of friends and our journey took us to the southern tip of the Bay of Fundy.

We stayed at a lodge set in a scrub spruce forest. The sun was just going down. I decided to call my wife Jean to check in with her. There was no phone booth, just the black phone and coin box attached to the cinder block wall on the outside of the building.

We chatted briefly, both seemed to be doing okay, kids and cats all accounted for, when suddenly, off in the distance, I heard that toot-toot-toot!

“That’s a saw-whet owl!” I shouted into the phone. Jean didn’t hear the owl’s call; it was very soft. But she did share my excitement, one of her many attributes.

Four years later, in April 2003, my son Drew and I drove north to the Boundary Waters Canoe Area to try to find wintering owls. I was specifically interested in boreal owls. We stopped at some spots along the Saw Bill Trail and the Honeymoon Trail to get out of the car and listen.

There was a lot of snow in the woods. Turning off the trail was quite tricky. We heard saw-whet owls on each of those trails, but never saw any, nor did we see or hear a boreal owl.

Time passes. In November 2009, one of our birding friends, Ben Wilson, reported the sighting of a saw-whet owl near his home in the Crepeau Woods of Arden Hills. A small group of us headed into the woods, following Ben’s directions, hiking the trails.

It was fellow birder Val Cunningham who spotted a set of eyes looking down at us from a tangle of vines and leaves along the trail. There was the cutest little owl, very calm, probably trying to get some sleep before a night of activity.

A day later, I took Jean over to the same spot and the owl was still in the same location. So, she got to see one, too.

My latest encounter with a saw-whet owl came at the home of my friend, Tim Canfield, of St. Anthony Park, in March 2013. He called one evening to say he had an owl in a fir tree near his house, did I want to come over and see it? Well, yah!

When I got there, Tim led me around the back of the house; and we crept up the side yard to the target tree at the front corner of the house. I could just make out the owl tucked into the foliage. I took out my camera and the flash exposed the little one. Again, a total cutie!

Tim and his wife Helen had a great view of the tree from inside the house. How lucky!

How small is the northern saw-whet owl? It’s the smallest owl in the eastern United States, listed at 7 inches tall. Males weigh about 3 ounces; that’s roughly the weight of a robin.

Saw-whets don’t all migrate. First year birds and females migrate, but most males tend to stay around the nest cavity… good nest holes are hard to find. Some migrants are captured in late fall at the banding station at Hawk Ridge, near Duluth.

Birds are usually placed in tubes, tennis ball cans, soup cans, etc., until the banders can get to all the processing they have to do with each one.

Not so with the saw-whets.

Laura entered the banding station and saw saw-whets sitting on the shelves, among the coffee cups, looking around, patiently waiting their turn to be weighed, measured, examined for feather wear and general health.

She says some saw-whets will even fly back into the banding station after they’re released as though they hadn’t quite seen everything they wanted to see! Read about them in her great book “Twelve Owls,” University of Minnesota Press, 2011, which describes the owl species found in Minnesota.

I look forward to my next encounter with a northern saw-whet owl. I haven’t seen everything I’ve wanted to see.

Author’s note: After writing my final draft of this column, I joined Val Cunningham, an avid St. Paul birdwatcher, on a trip to Carpenter Nature Center, near Hastings, to watch them catch and band saw-whet owls!

Those bird banders netted two owls that night, one of which flew into the nets a second time. So that WAS my next encounter with saw-whet owls!

And I learned a lot: about using black light to detect feather wear, migration paths, their cute little feet (and big talons!), their gorgeous, wide eyes, and much more. I’ve still got more to see!