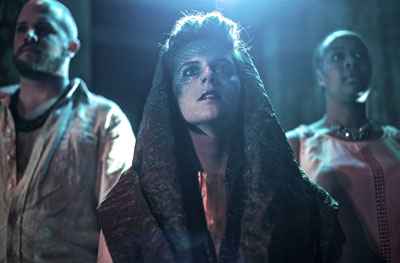 Laura Leffler-McCabe as Jocasta (center), Michael Ooms as Creon, surrounded by the ensemble in the March/April 2015 Savage Umbrella production of “These Are the Men.” Photo by Carl Atiya Swanson

A new organization in the Creative Enterprise Zone is working to transcend traditional dinner table conversations about difficult issues with an innovative approach to theater and collaborative creativity.

Savage Umbrella cooperates as a company to create new works of theater, constantly striving to engage artists and audiences in vital discourse. The organization hopes to use its new 20,000-square-foot space in First and First’s Vandalia Tower, 550 Vandalia Ave., to support a wide array of talent, while engaging audiences in critical conversations about social issues.

“Our basic thrust is for us to be a home both for artists and audiences,” says artistic director Laura Leffler-McCabe.

Founded in 2007 as a nontraditional collaborative theater company where artists could produce and act in each other’s works, Savage Umbrella has since served as a home to a long string of artists looking to push the boundaries in both structure and content of the theatrical realm.

“I think that what we make together is better than what we could make by ourselves,” says Leffler-McCabe. “One person’s vision is never as big as that of a room full of people.”

Those big visions have lead to works that ask audiences to confront some difficult, yet imperative questions. One 2011 work, “Ex Gays,” threw audiences into the perilous world of reparative therapy camps. Actors played the role of camp counselors who were “recovered gays,” while the audience members were the campers coming to be “treated” at the camp.

“It put the audience in this uncomfortable position of being implicated in the camp and all that that meant,” Leffler-McCabe says.

The audience often plays an integral role in Savage Umbrella’s productions. “We’re equal parts trying to serve the artists we work with and the audiences,” Leffler McCabe says. “We like to talk about creating space for critical conversation.”

By leveraging the avenues art can create to discuss challenging subject matter, Savage Umbrella is able to breach topics in a meaningful way not easily achieved, otherwise.

Savage Umbrella has a knack for surprising audiences into reflecting on big questions. Their recent work, “These are the Men,” reimagines the Oedipus myth, broaching feminist themes of agency, hegemony and power structure. By telling the story in a nonlinear fashion, producers were also able to simultaneously hint at ideas of time and fate.

It was a fortuitous turn of fate in 2014 that elevated Savage Umbrella to a new level, ultimately driving them to St. Paul and the Creative Enterprise Zone. During Give to the Max Day, Minnesota’s statewide day of giving, Savage Umbrella received a Golden Ticket, which turned a $10 donation into a $20,000 windfall.

The company had already been considering the possibilities a brick-and-mortar location could provide. When news of the good fortune came down, “it allowed us to take the leap and make it a reality,” Holman says. “The idea is to fill [the space] with as many artists as we can, as often as we can.”

Only a couple months in, Savage Umbrella is already leasing out the space to a plethora of improvisation groups, costume and set designers, even yoga classes. “We really wanted to have a place that is affordable and that is always available for artists,” Holman says.

The emerging model is still a grand experiment, of sorts, that is allowing the group of artists to dream big. They’re gearing up for an ambitious upcoming season, including the launch of a mentor series for younger collaborative theater makers, as well as a new project based on the serialized progression of short segments that model a television sit-com. This Halloween, audiences can also catch a boutique performance of a horror thriller called “Sweet Dreams, Alfie.”

For now, Savage Umbrella is happy to have landed in St. Paul at what appears to be a pivotal time for the arts in Minnesota’s Capitol city. “It does feel like there’s something exciting happening in St. Paul, right now,” Holman says. “Something is bubbling up creatively.”

You can find out more about the company at www.savageumbrella.org