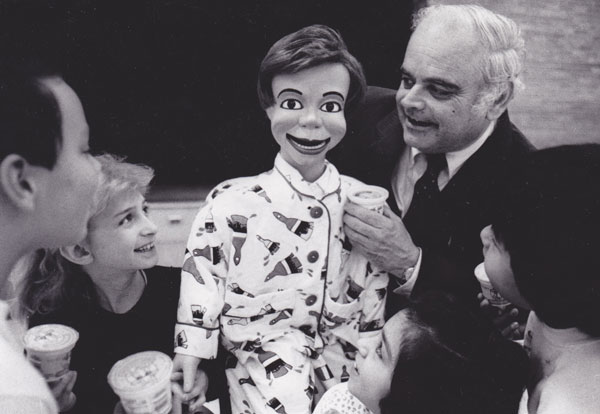 Como ParkHistory: One darn thing after another

Ventriloquist ‘loved life on the road’

In the last issue of the Park Bugle, a photograph of a home on West Hoyt Avenue (“Garage homes were once a Como Park phenomenon”) reminded some readers of Victor Etienne, the colorful character who lived there for almost 40 years.

Etienne (pronounced “etnee”) was known to generations of local schoolchildren as a genial ventriloquist who, with the help of his wooden friend Terry, used humor to impart life lessons such as “Patriotism: What It Means to Be an American,” “Safety Counts,” “Be Healthy, Stay Healthy” and “Self-Esteem.”

After suffering a series of debilitating strokes, Etienne died in 2015. But in his prime, Victor was a “ball of energy,” crisscrossing the country to appear before school audiences and church groups, scout rallies, hospitals and care centers, said his younger brother, Brian.

“Victor loved life on the road and for many years was seldom home,” Brian recalled. “He drove to appearances for much of that time, but in his later years would take the Greyhound or Amtrak.”

Victor always returned to the Como neighborhood where he grew up. There was an entertainment tradition in the family, his father having skated in the Ice Follies variety show in the 1930s. Brian, a Roseville resident, is a drummer and has backed nationally known artists such as Melissa Manchester and Amy Grant. He also is active in the local acting community, most recently appearing in the Rosetown Playhouse production of Disney’s Little Mermaid at the Como Lakeside Pavilion.

In 1992, Victor told the Park Bugle that he got his start in show business appearing before his sixth-grade class at Chelsea Heights Elementary School. He went on to graduate from Murray High School in St. Anthony Park in 1958 and enrolled at North Central Bible College in Minneapolis.

He planned to return for a second year, “but I kept getting bookings,” Etienne recalled and his career path was set. Spurning nightclubs and theaters, he regarded himself as a “traveling minister” or evangelist, a reflection of his lifelong membership in the Assemblies of God Church.

His journeys took him to every state in the union, as well as to Canada, Mexico and Great Britain. But Etienne eventually wearied of the demanding schedule and restricted his travel outside Minnesota to the summer months, staying in state during the school year.

He played in Scrabble tournaments, followed minor league baseball teams around the country and golfed.

Victor got his first cat, Monty, when the stray adopted him somewhere out East, Brian relates. Monty accompanied him on most of his travels. Later, Victor could be seen walking Monty’s successor, Lucky, on a leash down Hoyt Avenue, where they would sit on a bench and watch the golfers on the Como course.

After suffering the first of what would be four strokes, Etienne was helped to a waiting car by a passerby—this writer. “Watch your blood pressure,” he admonished.