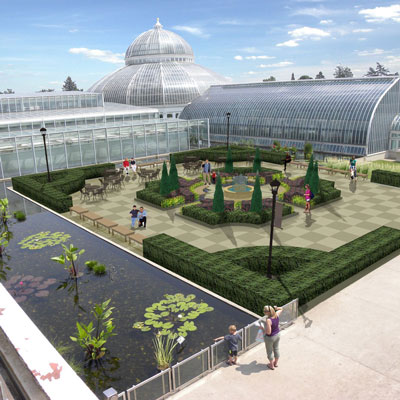 The Centennial Garden is the first element of a plan to bring back botanical features that park visitors would have seen at the time the Marjorie McNeely Conservatory was built.

The first in a series of formal gardens to be established around the Visitor Center and the Marjorie McNeely Conservatory in Como Regional Park opens early this summer.

The Centennial Garden will serve as a focal point for observances to celebrate the 100th anniversary of the conservatory and pay tribute to those who worked to get it built and subsequently become a Twin Cities landmark.

“The design of the Centennial Garden harkens back to several legacy gardens in Como’s past,” explained Michelle Furrer, director and campus manager of the Como Park Zoo and Conservatory.

These included “garden rooms” near the conservatory that featured fountains, arbors and plantings. It was a style of garden, Furrer said, that was representative of the English Victorian era that the conservatory evoked. Horace Cleveland, the renowned landscape architect who shaped the early park, favored the concept of a “landscape park” as an escape from city life. Frederick Nussbaumer, early park superintendent, also was a disciple of the school of picturesque landscaping, but recognized the importance of recreational facilities and tried to balance the two concepts.

Furrer noted that the construction of the Visitor Center about 10 years ago eliminated the McKnight Garden near the conservatory. While plans called for formal gardens to be established on what became lawn areas, funding did not become available until recently.

Support for the Centennial Garden included $272,000 from the Minnesota Arts and Cultural Heritage Fund, as well as a $168,000 contribution from Como Friends, a nonprofit organization.

The garden will provide a natural gathering place for daily visitors, as well as a relaxing setting for after-hours events, Furrer said.

Observances of the Conservatory centennial will kick off on June 19 and continue through Nov. 8.

Roger Bergerson writes about community news and history regularly in the Park Bugle.