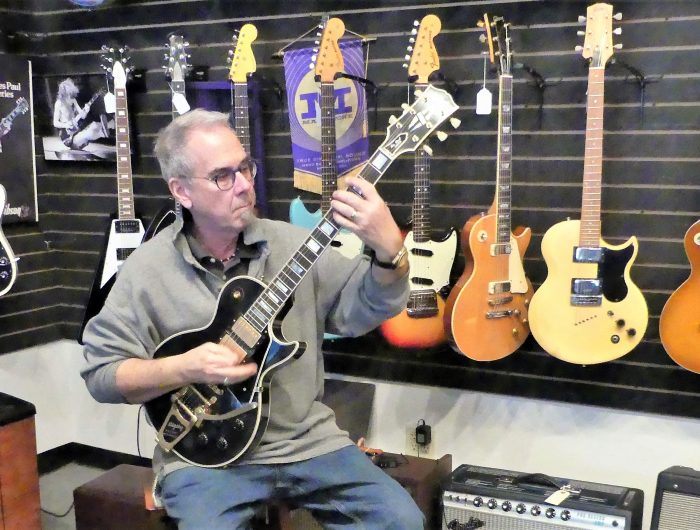 A longtime Mac-Groveland business in St. Paul that counts Bruce Springsteen, Billy Joel, Sheryl Crow and Led Zeppelin’s Jimmy Page among its customers is moving to a quiet corner in the city’s St. Anthony Park neighborhood.

Willie’s American Guitars, which boasts an international reputation and has catered to elite musicians since 1988 from a storefront on Cleveland Avenue, is relocating to 1381 Eustis Ave., just off Highway 280.

Meanwhile, he has enlisted the trade skills of several guitar playing friends and former bandmates to remodel the interior of the building, which boasts a 27-stall parking lot, solar power and “bullet-proof construction,” according to Westgor (aka “Willie”).

A steep rent increase and two-plus years of operating next door to the School of Rock motivated Westgor to relocate.

“It’s a great thing for students, a fantastic program to teach kids to play (music),” he said, “but they didn’t adequately soundproof it. It was like there were no walls.”

Westgor, who has six full-time employees and four part-timers, isn’t concerned the move will hurt business.

“We’ve been a destination for 35 years,” he said, adding that much of his business is mail order and in-store shopping has been by appointment only during the pandemic. “The working pros are our specialty.

“This isn’t where you buy your first guitar,” added Westgor, emphasizing that he sells only American-made instruments. “That market is covered by everyone else. If you’re a pro, your options really shrink.”

So, top guitarists seek him out.

“My business is unique,” Westgor said. “I have expertise in classic, vintage American guitars. That’s a hard thing to teach. It’s like a mechanic who works on ’50s and ’60s cars. Because of that expertise, we’ve made friendships with every rock star.”

Willie’s guitars list from about $1,000 to $5,000—“a real sweet spot for us,” he said. The shop also services guitars, banjos, mandolins and sound equipment.

At age 64, Westgor has thought about retiring, but “the demands of the marketplace have kept me going.”

“(Industry-wide,) business is up considerably (the past few years), he said, citing that 23% of Americans play guitar, according to a survey by instrument maker Yamaha. “Guitar factories are sold out for years in advance. What I’m ordering now I won’t see until 2024.

“For people who don’t play, they don’t understand the draw. For those that do, we are an international destination.”

For celebrities such as Springsteen, Westgor said, “We bring stuff to them,” but multi-award-winning country music star Chris Stapleton, unnoticed by the other customers, dropped in to the Cleveland Avenue store during a recent tour stop in the Twin Cities.