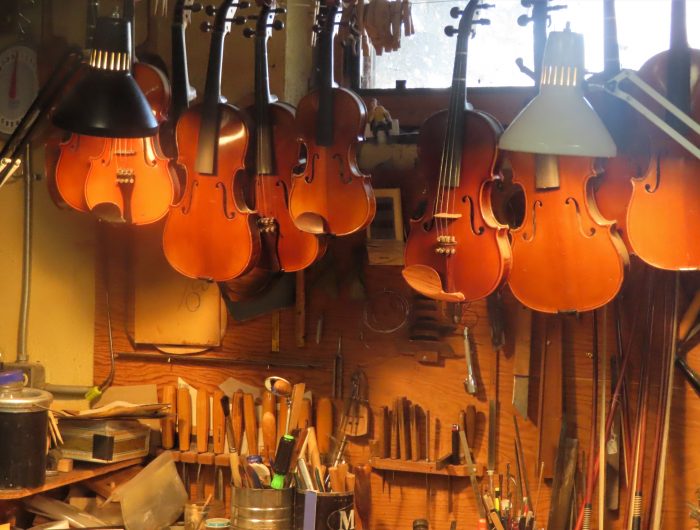 Mike Smith sits at his workbench inspecting a violin that has had its varnished top removed.

Dozens of chisels and other hand tools are lined up within his reach.

Violins and violas are suspended overhead. Racks of string basses crowd the room. All need some type of repair or adjustment.

Smith, the sole proprietor of John Michael Smith, Luthier LLC, has been repairing and restoring stringed orchestral instruments in the Twin Cities for 41 years, including 35 years in the basement workshop of his St. Anthony Park home.

After earning music degrees from East Carolina University and Ohio State University, Smith began his instrument repair training at a Columbus, Ohio, violin shop. He also worked on instruments and bows owned by the then-principal bassist of the world-renowned Cleveland Orchestra.

After arriving in the Twin Cities in 1980, Smith worked at House of Note, a stringed instrument shop in St. Louis Park, before opening his home business.

Word-of-mouth recommendations spurred Smith’s growing business. Rarely is restoration or repair work recognized in music competitions, as are instrument makers. Yet, people who do such work have to gain the confidence of those who own the instruments—especially expensive or historically important ones—before they are entrusted with them.

“Your reputation is everything as far as other people telling people you’ve done good work,” said Smith, 67, a native of the Norfolk-Virginia Beach, Va., area.

Now his clients run the gamut from professionals in the Minnesota Orchestra and St. Paul Chamber Orchestra to 4-year-old kids with one-sixteenth-size violins, he said.

But the past year has been like none other. COVID-19 restrictions in March 2020 forced rehearsals and concerts of all kinds to be put on hold. School ensembles had to adapt to follow state guidelines. Smith’s business fell 75 percent, he said.

“I think on the other side, because (musicians) weren’t working, they didn’t have any money. That played into it,” he said. “And students weren’t playing in orchestras and not practicing as much.”

Classical music is Smith’s “bread and butter,” he said. But he has also played folk, country, jazz bass in night clubs and “lots of church jobs.”

Only recently has there been any movement toward pre-COVID-19 activity levels.

“My business really tailed off, but it is picking up now,” Smith said. “People are seeing light at the end of the tunnel.”

Musical organizations, such as the Minnesota Opera, “are finding ways to stay valid during this time when we couldn’t do live performances,” Smith said. “And we’ve slowly come up with ways to do recording.”

After the Minnesota Opera had to cut short its 2019-20 season, it made available audio and video recordings from previous seasons, Smith said.

More recently, the Opera has offered compilations of small ensembles of singers and musicians, who individually recorded their parts at home or physically distanced in a large rehearsal space. For example, the Opera conducted its “Opera in the Outfield” with audience members viewing a recorded performance on a video screen at CHS Field, the St. Paul Saints’ ballpark in Lowertown.

In May, Smith performed with members of the Minnesota Opera Orchestra in a virtual production of Benjamin Britten’s opera “Albert Herring.”

“Most musicians are chomping at the bit to play again,” Smith said. “But there’s certainly hesitation about being on stage with everyone—­especially with the wind instruments spreading aerosols.

“But vaccines have hastened people’s confidence in feeling safe. Gradually, if everyone is vaccinated, we can get more people together safely.”