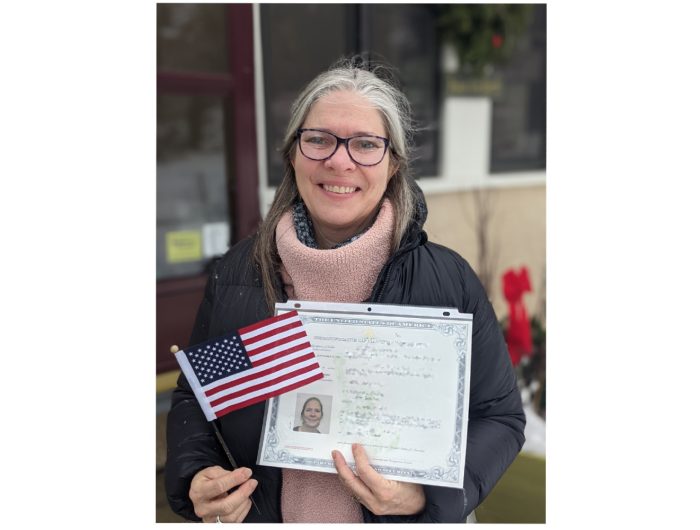 Sonia Ellis became an American citizen in mid-January this year. Born in Uruguay, Ellis has lived in St. Paul since 2005 and racially identifies as White Latina. Among her many roles, Ellis is an advertising sales representative for the Park Bugle.

Q: Where were you born?

A: I was born and raised by British parents in Montevideo, Uruguay, where I studied to become a secretary and worked at an international school for 22 years. My relatives are scattered all over the globe: Uruguay, England, Australia and the U.S. My husband Josh Becerra, who was born in St. Paul and grew up in SAP, and our two daughters, Maggie and Isabella (who were both born in Montevideo), moved to SAP in August 2005. Our daughter, Angelina, was born after we moved to Minnesota. I am the final member of our immediate family to become a U.S. citizen.

Q. Why did you decide to pursue citizenship, especially in this time of political turmoil?

A: I decided to pursue it especially because of this time of political turmoil and it just felt like the right time to do it!

Q. What was the citizenship application like? What feelings did you experience along that journey?

A: The process is long and tedious with lots of online forms to fill out. My eldest daughter, Maggie, and I started the process back in October 2019, appointments were scheduled in March 2020 but then canceled due to Covid. Maggie became a citizen in September 2020, I in January 2021.

To be honest it has been a roller­coaster of many mixed emotions. I have thought a lot about my mother, sailing to Uruguay from Portsmouth, England, with her first husband at age 22, becoming a Uruguayan citizen and living there until she died at age 79.

My father travelled from Wales in Grandma’s belly on board a ship in 1922, a British subject, born in Uruguay. My sister left Uruguay with her young family during the 1973 Uruguayan dictatorship, headed for Australia and she’s been there since. We are all nomads really, gypsies of the Earth.

Q. Can you describe the citizenship ceremony?

A: Unfortunately, due to Covid the citizenship ceremony was very anti-climactic. Ten masked socially distanced people in a room watching a judge over a big screen was not how I envisioned it! Nonetheless, very emotional.

Q. How did you feel that day?

A: Ever since I started the process, I was very nervous about it. Did I fill out the forms right? Do I have the right documents? Will I be accepted? Deported? This fear is real, throughout the whole ­process—especially with all that has gone on in recent years. Regardless of those fears, once I walked out of the building a big weight was off my shoulders! My family is safe now.

Q. What will you always carry with you from Uruguay?

A: Uruguay is imprinted on my heart. I grew up there for 40 years, how could it not be? But, after living in the U.S. for over 15 years, the people have carved out a big place in my heart. This is where my family is (or at least most of it!), this is where my home is, my support group. The U.S. feels like home now.

Q. What else would you like our neighbors to know?

A: After announcing my citizenship on Facebook a few weeks ago I became aware of how many neighbors didn’t really know much about me. Some responded that they thought I was born in the U.S.

Now, I know that I am a White, blonde (now gray!), green eyed woman who speaks fluent English and Spanish, which aren’t characteristics that most associate with Latinas.

The truth is I don’t have to deal with the racial profiling or other problems many other Latinos deal with in the U.S. But it got me thinking that we all could do a better job at taking the time to learn more about one another. Don’t assume things. Ask and get to know your neighbors, have a conversation, listen and take them for who they are, a fellow human being.

Sarah CR Clark is a St. Anthony Park resident and a regular Bugle freelance writer. Know of someone who would be an interesting subject for Voices, a column devoted to expanding our roster of community contributors? Please email Sarah at sarah.cr.clark@gmail.com or Scott Carlson at editor@parkbugle.org.