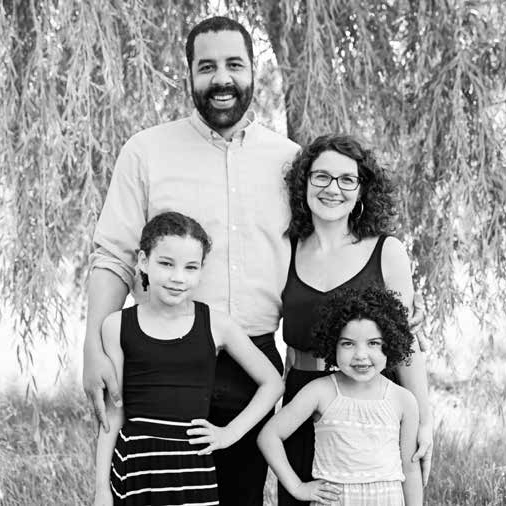 Dominick Washington, of St. Anthony Park, considers himself both African American and Caucasian.

Dominick grew up in Sioux Falls, S. D., and graduated from Augustana University in 2000. He is married to Summer Martins and is father to two young children. Dominick is assistant vice-president of strategic communications at the Federal Reserve Bank of Minneapolis. The following is my conversation with Washington:

Q: Dominick, can you share a story of about a time when you experienced discomfort or injustice because of your skin color?

A: Oh yeah, I have a bunch. A couple years ago I was at St. Anthony Park Elementary for the end-of-the-year picnic and a woman said to me, “You must get this a lot. You know who you look like?” And I said, “No.” She said, “Drake.” And I was like, “No. No one’s ever said that to me.” And she just said, “No. You look like Drake.” But, I don’t. And that’s the problem. There’s this discomfort, when you’re singled out for how you look different.

My personality has been shaped by trying to make people comfortable. I’ve spent a lot of time cognizant of other people’s discomfort and focused on making them feel comfortable with who I am—as a black man. And that, in and of itself, is pretty exhausting.

I don’t think I honestly realized that this was the case for me until the Philandro Castile shooting. I drive down that street (Larpenteur Avenue) all the time. And this guy did all the right things, but the cop saw him as a threat to his life. Because he’s Black. And that’s it. That was a real point of reckoning for me.

I used to be very reluctant to say that race was an issue. But I’ve accepted that I’ve endured injustice. I am a very affable person and I can make people feel comfortable and calm. Those are good skills to have. And I have them because I am constantly doing that to make people comfortable with me not being white. And for me, as a Black man, to take that long to come to grips with the fact that racism is a big problem, speaks to how difficult this problem is. Everyone likes to be comfortable. Especially in the Midwest.

Q: How did your family manage during the civil unrest after George Floyd’s murder?

A: That Thursday night when everything was going down, I went out to my backyard to listen to the police scanner. And I kept wondering, “Where are we?!”

Our family makes it a point to eat dinner together and we talk together about the events. Summer and I invited the kids to ask all their questions. Our children are very observant and very aware, and just like me, they don’t like to be uncomfortable. But we can’t allow our kids to be beholden to discomfort. We want them to be able to talk through it. I’ve tried to be a lot more open about my own experiences to not perpetuate the power of being uncomfortable.

Q: We have neighbors who desire to DO something about systemic racism. What’s your perspective on that?

A: It’s not enough to know that something is wrong. You have to want to understand why the wrong things keep happening and decide that you want to do something about it. Even if it makes you uncomfortable. I appreciate our neighborhood’s concerns for hyper-local issues and global issues—but that same level of concern feels lacking for issues just two or three miles away. It’s not obliviousness. But it’s this “I don’t do racist things, so I’ve done my part” thinking. There’s a self-satisfaction that comes with that—and I get it—but that in and of itself is not super helpful.

I’ve been thinking about justice as a finite resource. (My wife thinks I’m being cynical.) You can’t rectify an unjust situation without creating some other injustice. Injustice is inherent. There’s going to be oppression and inequality. That’s just the way of the world because you can’t allocate resources perfectly.

But injustice is wrong—especially if someone is always on the short end of the stick. There is no end to injustice, which is actually comforting to me because it seems less overwhelming and there’s an answer in there somewhere: If we can just try to fix one injustice that we’ve identified as costing people their lives, then any resulting corresponding injustice might be one we can live with.

Q: Is there anything else you want our neighbors to know about being a person of color?

Sarah CR Clark lives in St. Anthony Park and is a regular freelance writer for the Bugle. Know of someone who would be an interesting subject for Voices, please email the newspaper at sarah.cr.clark@gmail.com or editor@parkbugle.org.