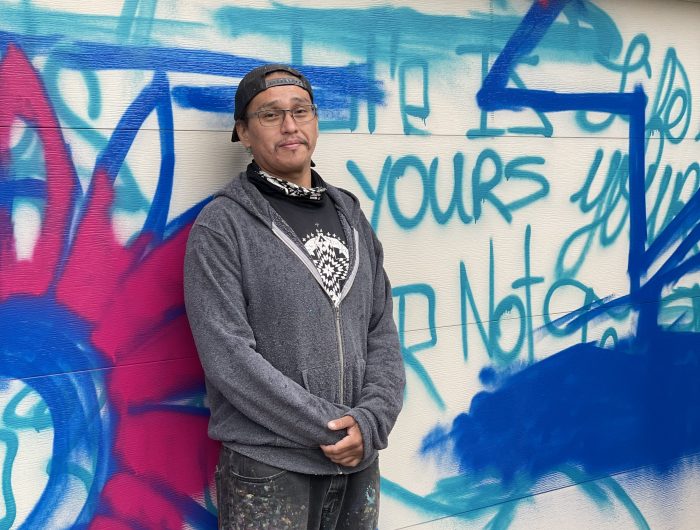 Focus Smith is a graffiti artist who identifies as Lakota and Navajo. He was a featured muralist at Chroma Zone’s Bang It! Mural Meet in May 2021.

Although he is from the Black Hills, through his art, Focus will remain a part of the south St. Anthony Park neighborhood for years to come.

The Bugle talked to Focus while he was “planting a medicinal mural,” commissioned on a private garage near Twin Cities German Immersion School in the Como Park neighborhood.

Q: What messages do you hope the art you’re making today will convey?

A: The way this world is now, well . . . there was another world that existed. It was all very simple and tied in with the whole idea of honoring and respecting the land. The land is where we got our first teaching from—and it showed us how to learn, grow and share with one another.

The way the world is now (it) is all very convoluted and that’s not OK.

Anytime people look at the mural, it points back to the land. It points back to what’s already here: The stars in the sky, the cycles of the moon, the water that’s here. Those things are all a lot easier for people to accept than me saying indigenous people were here first, because for some reason that trips people up. I watch that happen time after time. I can feel it.

Pointing back to the land offers people a narrative. I’ve learned that people don’t have anything to fight back about against the land.

Q: Can you tell me about the piece you created for the Bang It! mural event?

A: The Lakota people have had different societies for a long time, made of individuals who show a specific strength. Each society would work within the community to figure out problems. That mural I painted for Bang It! is to pay tribute to the Lakota societies I find myself more in frequency with.

Q: Tell me a bit more about the work you’re currently doing in the Twin Cities.

A: Originally, I came for Chroma Zone’s Bang It! Mural fest. The founder of Bang It! and Sprayfinger (Ed.’s note: Sprayfinger is a local graffiti arts educational program), Peyton Scott Russell, asked me to paint a mural and teach some classes at Sprayfinger. I decided that while I was here, during the daytime, I could go out and paint. Luckily I’ve had a lot of really cool people support that.

I went to George Floyd Square with Peyton Scott Russell and his brother to help them set up for their performance. I didn’t know anyone else there, apart from them. So, I started talking with people who were painting. That’s how I got a spot on the wall for another mural. I just asked someone, “Hey, can I paint?” And I ended up painting next to Wes Winship, this super influential artist I’ve always heard about but didn’t know. It just clicked.

A: I would call “home” the Black Hills. But for the sake of everyone else and mental connectivity, I would say that it’s OK to use the word “Rapid.” Again with the idea that you get into those things and that’s when people start turning their ears off. There’s been so much happening this year and it’s almost like you don’t want to burden people with any more. But, at the same time, accountability comes when people know.

In May 2021, 24 indigenous kids went missing from the county I come from. You don’t hear anything about that on the news. And recently another native man was shot and killed by the Rapid City Police Department.

Two days after that, on a video, one of our affiliates witnessed a sheriff slapping a native woman on the mouth because she wouldn’t shut up. That’s where we live. That’s why it’s called “Racist City” or, “the Deep North.” This stuff happens and no one does anything. There’s a deep ache there. You can feel it.

To see Focus’s art, follow him on instagram @Focicurrent or learn more about his community building work at www.thriveunltd.com.

Sarah CR Clark lives in St. Anthony Park and is a regular freelance writer for the Bugle. Know of someone who would be an interesting subject for Voices? Please email sarah.cr.clark@gmail.com or Bugle editor Scott Carlson at editor@parkbugle.org.