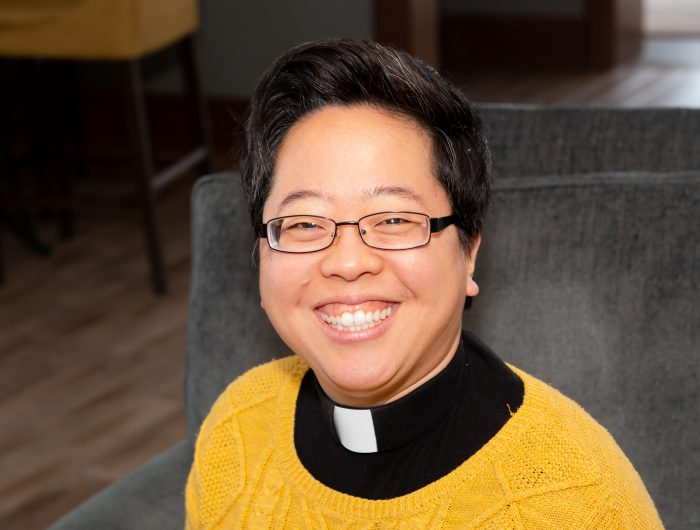 Editor’s note: An earlier version of this interview was posted to our web site Oct. 29, 2020. This article has been edited and updated in response to racist attacks on Asian Americans and Pacific Islanders around the country.

Jill Rode, who identifies as an Asian American queer woman, is pastor at St. Anthony Park Lutheran Church. Her wife is also a pastor in the Evangelical Lutheran Church in America.

Q: Jill, how has the mass shooting in March in Georgia impacted you?

A: First, my heart breaks that we have to mourn more tragic loss of life due to yet another mass shooting in this country.

Second, I’ve been troubled by the rhetoric around the Georgia shooting and the way that some in the media and within the responding law enforcement community have tried to downplay the relationship between race, misogyny and the crime.

Third, it’s been difficult to find a space within which to process this news. As someone who presents Asian, the thought of, “This could happen to me,” is acutely on my mind.

At the same time, as an adopted Korean American who grew up largely in white spaces, it can be difficult at times to feel Asian enough to contribute to conversations about violence towards the Asian American community.

Q: What do you think about the “Stop Asian Hate” movement?

A: It’s about time. The Asian American Pacific Islander community is vibrant, diverse and is largely invisible (apart from the harmful stereotypes that are too prevalent). The more visibility we can bring to traditionally silenced and forgotten voices and people, the stronger our country will be. We need to condemn acts of hate. Raising awareness is the first step.

Q: How has this time of national racial reckoning inspired you to reflect on your own racial identity?

A: I’ve been doing a lot of reflection on my own racial identity since May (when George Floyd was killed while in police custody). I’ve been reminded that, as an Asian American in the Lutheran church, there isn’t a space carved out for me. I can’t easily get together with other Asian American pastors to talk about the issues we face. In a way, it really gets to the wider issue of the invisibility of Asian Americans in the U.S.

The model minority myth really serves to divide and pit different races against each other as it creates a sense of unfairness. So, it’s been really important to me, as a person of color, to try and advocate for and amplify the cries we hear from other people of color. In the words of the late, great Paul Wellstone, “We all do better when we all do better.”

I’ve been thinking about how my Asian-ness has not been a big part of my identity, partly because the family I was adopted into is white and partly because issues of Asian Americans are never highlighted and so I never think about them.

As I get older, there is more of a draw towards diving deeper into my identity, where I came from and who I am.

Q: How has your experience, as an Asian American queer woman, strengthened your leadership?

A: I think anytime you come out of a marginalized group of people, your well of empathy is super expansive. It’s just bursting at the seams because you know that it doesn’t feel great to be “othered.” I think one of my great leadership strengths is my empathy, particu­larly for people who don’t quite fit in, because I’ve been there and continue to be there.

Q: Can you share a story of a time when you experienced injustice?

A: Growing up as a kid in Arizona I got teased a lot for looking Asian. Kids made mock-Chinese sounds at me, which clued me in that I was somehow different.

As an adult, people sometimes ask, “Where are you from?” And I’ll say, “I’m from Arizona.” They’ll pause and say, “No. Like, where are you really from?” It’s microaggressions like that that indicate to me, again, I am somehow “othered.”

But the greatest example has been waiting for my current call (pastoral position) because of my sexuality. My wife is a pastor too, and we both certainly waited longer than average to receive our first calls. We were told by several churches that they wouldn’t interview us, for no other reason than that we were queer.

I don’t ever just subconsciously hold Gretchen’s hand without thinking through who is around us or if this is a safe space, until I’ve scanned the space. Every space feels a little bit unsafe, all the time, at least for me. And that feels unjust. n

Sarah CR Clark lives in St. Anthony Park and is a regular freelance writer for the Bugle. Know of someone who would be an interesting subject for Voices? Please email sarah.cr.clark@gmail.com or Bugle editor Scott Carlson at editor@parkbugle.org.