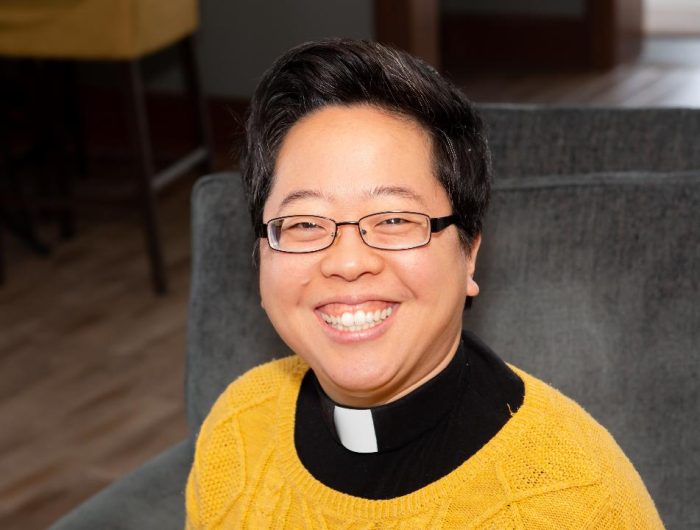 Jill Rode, who identifies herself as an Asian American, is pastor at St. Anthony Park Lutheran Church. Her wife is also a pastor in the Evangelical Lutheran Church in America (ELCA). The Bugle recently interviewed Rode for our Voices column.

Q: Jill, what have you been hearing from your congregation since the murder of George Floyd?

A: The big theme I hear is that people want this time to be different. George Floyd’s murder triggered memories of Philando Castile, who was killed in our neighborhood. I think we were hoping that something back then would be the catalyst for change. But there’s something about George Floyd that has really lit a fire around our nation.

I hear a renewed resolve to look at ourselves and our complicity in the system and to do better on an individual level. My congregation is reading “Dear Church,” a book by a Black, Lutheran pastor, the Rev. Lenny Duncan. Our high schoolers are watching racial justice movies every month and then talking about it. So far, we’ve seen “Just Mercy” and “13th.”

We’re also asking questions about how Jesus is portrayed in and around our church. Also, if budgets are moral documents—and we say we are committed to the work of racial justice and reconciliation—how is that reflected in our budget and staffing?

Q: How has this time of national racial reckoning inspired you to reflect on your own racial identity?

A: I’ve been doing a lot of reflection on my own racial identity since May. I’ve been reminded that, as an Asian American in the Lutheran church, there isn’t a space carved out for me. I can’t easily get together with other Asian American pastors to talk about the issues we face. In a way, it really gets to the wider issue of the invisibility of Asian Americans in the U.S.

Also, there’s this sense that since I’m a minority, I can’t be racist. But that’s not true. As humans we’re all racist. I love the Paul Wellstone quote: “We all do better when we all do better.”

The model minority myth really serves to divide and pit us against each other. So, it’s been really important to me, as a person of color, to try to stick up for and amplify the cries we hear from other groups of people because we all do better when we all do better.

I’ve been thinking about how my Asian-ness has not been a big part of my identity, partly because the family I was adopted into is white and partly because issues of Asian Americans are never highlighted and so I never think about them.

As I get older, there is more of a draw towards diving deeper into my identity, where I came from and who I am.

Q: How has your experience, as an Asian American queer woman, strengthened your leadership?

A: I think anytime you come out of a marginalized group of people, your well of empathy is super expansive. It’s just bursting at the seams because you know that it doesn’t feel great to be “othered.” I think one of my great leadership strengths is my empathy, particularly for people who don’t quite fit in, because I’ve been there and continue to be there.

Q: Can you share a story of a time when you experienced injustice?

A: Growing up as a kid in Arizona I got teased a lot for looking Asian. Kids made mock-Chinese sounds at me, which clued me in that I was somehow different.

As an adult, people sometimes ask, “Where are you from?” And I’ll say “I’m from Arizona.” They’ll pause and say, “No. Like, where are you really from?” It’s microaggressions like that that indicate to me, again, I am somehow “othered.”

But the greatest example has been waiting for my current call (pastoral position) because of my sexuality. My wife is a pastor too, and we both certainly waited longer than average to receive our first call. We were told by several churches that they wouldn’t interview us, for no other reason than that we were queer.

I don’t ever just subconsciously hold Gretchen’s hand without thinking through who is around us or if this is a safe space, until I’ve scanned the space. Every space feels a little bit unsafe, all the time, at least for me. And that feels unjust.