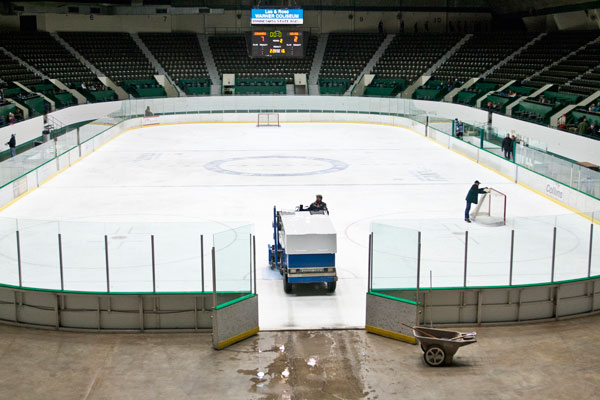 The Como Park/Central Cougars boys’ hockey team is looking for a new rink to hang the team’s banner. But getting the rink the team wants is a matter that remains in flux.

The Cougars had been practicing and playing for 15 years at the Lee & Rose Warner Coliseum at the Minnesota state fairgrounds. The state fair announced in December that it would no longer maintain the ice at the coliseum and closed the arena in February.

That’s left the Cougars scrambling to find a new home.

Michael Searles, Como Park’s athletic director who manages the combined Como Park/Central high school teams as well as the St. Paul Blades girls hockey team, has requested that Oscar Johnson (O.J.) Arena on Energy Park Drive near Snelling Avenue become the new home for both the boys’ and the girls’ teams. The Blades is a cooperative team made up of junior and senior high school players from across the city.

O.J. is the arena that is closest to Como Park and St. Paul Central high schools and most of the players’ homes, Searles said. The Blades have been playing at West Side Arena for a number of years, but Searles wants the girls team to move to O.J. with the Cougars. He’d also like to see an upgrade of facilities at O.J. to accommodate the teams.

Most of the after-school ice times (3 to 5 p.m.) at the Energy Park Drive arena go to its two major tenants, Hamline University and Roseville Area High School, according to Greg Mack, Ramsey County director of parks and recreation.

The county has a letter of agreement with Hamline and plans to continue giving the university priority hours. The county—which operates 10 arenas, with seven in St. Paul—has offered Searles the use of the Ken Yackel West Side Arena, 44 W. Isabel St., for practices and games at three different arenas in the city. The county has also offered O.J. for one practice a week.

Searles said he’s concerned that if high school players have to travel across town right after school, students and parents may move to a program that’s closer to home. For students in the St. Anthony Park and Como Park neighborhoods, “it’s probably a shorter drive to Roseville,” Searles said. He wants St. Paul kids stay in St. Paul schools, he said.

Nearly 30 parents and players from the Como/Central and Blades teams attended the St. Paul Public Schools Board of Education meeting on April 15 to urge board members to help the teams negotiate with the county. Parent Mark Tully read a statement outlining the team’s desire for a rink close to the schools and a place they can call home.

The 2014-15 school hockey season is going to be a “transitional year,” said Mack. “Right now there are a number of moving parts.”

Ramsey County is in negotiations to buy the Vadnais Heights Sports Center, Mack said. And in early April, the North St. Paul Area Hockey Association announced it was working on a merger with the St. Paul Johnson Como Hockey Association. That merger could free up ice time at Gustafson-Phalen Ice Arena near St. Paul’s Johnson Senior High School and the Vadnais arena may be attractive to Roseville programs if the deal goes through, Mack said.

“There may be opportunities,” Mack said. “We’re waiting for things to sort out a bit.”