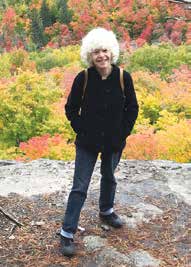 Susan Warde, a St. Anthony Park resident and writer, is the winner of the Bugle’s 10th annual poetry contest.

This is the third time that Warde has won our annual contest that is held in April during National Poetry month. She also won in 2016 with her poem “Ashes to Ashes” and in 2013 with “The Seven Months That Aren’t Winter.”

This year, we asked our lyricists to draw their inspiration from these words: stress, contentment and/or peace. All entries were judged anonymously by former Bugle editor David Healy, also a longtime writer and poet from St. Anthony Park whose writings have appeared in the Turtle Quarterly, Dash, Elysian Fields Quarterly, and the Minneapolis Review of Baseball.

Healy chose what he considered the top three entries. As our first-place winner, Warde will receive $50.

Second- and third-place finishers this year are Betty Wheeler and Marilynne Thomas Walton, respectively. Here are our top three poems:

Healy’s review: There are some wonderful images here: geese furrowing the skies, an anticipation, perhaps, of the furrows that will result from certain green piercings of the soil; the Mississippi’s brown determined hustle toward the Gulf. I like impending spring described as winter’s “dissolution,” that word connoting both a chemical process—ice and snow dissolving to water—and the idea of termination. John Steinbeck, though he lived in California, asserted, “I’ve lived in a good climate, and it bores the hell out of me. I like weather rather than climate.” Obviously, this writer does too.

Healy’s review: Where is peace? It is evocatively bodied forth in this poet’s lyrical descriptions of the natural world. It’s even found in a ditch, where lilies bloom. I like the references to gravity, both explicit—water falling—and ­implicit—the eagle, defying gravity as it ascends on helium wings.

Healy’s review: Ah, the Fair. Indeed, its air is viscous, thick with the scent of culinary temptations. And those flap-dancing chickens: Ya gotta love ’em. To paraphrase Paul Simon, “Something tells me it’s all happening at the Fair.”