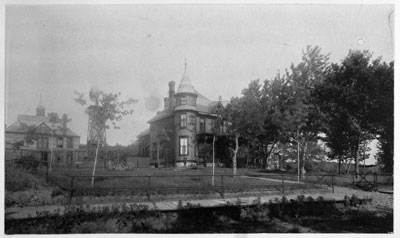 Warrendale was suburban dream in 1885

When residential lots went on sale in a “beautiful suburban village” adjacent to Lake Como in 1885, prospective buyers were assured that “not just anybody” would be allowed in.

Building permits in Warrendale would not be issued for homes valued at less than $1,500, “so that all who go there to build may be confident of being surrounded with a good class of neighbors.”

One of the “railroad suburbs” that the expansion of rail service made possible, Warrendale was a 52-acre portion of the former Aldrich farm. It was bounded by Chatsworth Street and Lexington Avenue on the east and west, respectively, and West Como Boulevard and Jessamine Avenue (in that era, McKenty Street) on the north and south.

An ad described the quality of life a new homeowner might expect after an easy commute home from his downtown St. Paul office: “He may take a row on the lake before supper, or a game of croquet or lawn tennis. His children thrive in the pure country air, and have ample grounds all around them. The butcher, grocer and baker come to his door every morning for orders.

“He has city gas and water in his house and a graded school for his children and if he wishes to go to the theater he can get to the performance in half an hour and a late train brings him home afterward at a reasonable bedtime. In short, he has the most essential city comforts and conveniences, and is at the same time surrounded by the quiet coolness and healthfulness of the country.”

Of course, there was no city water or gas or school at that time. Como Park opened in the summer of 1886 and the lake, at the point, probably wasn’t too visually appealing. City officials pledged to raise the level by 4 feet and pump in city water to keep it there. (That turned out to be an expensive and ultimately futile exercise.)

The principal developer of Warrendale, Cary Warren, named the tract after himself, of course. A recent transplant from Louisville, Ky., he built himself a splendid home at what is now 1265 W. Como Blvd., a residence that exists today.

For his occupation, the 1890 city directory listed “capitalist.”

The city workhouse was located directly across Lexington Avenue from Warrendale and as a city councilman, Warren decried the practice of prisoners who’d served their time “being turned loose on the residents of Warrendale and vicinity.” He wanted them taken downtown and discharged at the central police station.

In 1893, Warren established Warrendale Greenhouses at 1236 Churchill Ave., an enterprise that continued in operation there until about 1925.

But the stock market and banking collapse that became known as the Panic of 1893 probably proved to be his undoing. He moved back to Louisville in 1896 and the Warrendale Improvement Co. was placed in the hands of a receiver. Some of the lots in the development were in foreclosure.

Warren’s home may have been on the market for a while, because the Commercial Cyclers Club—a bicycling craze was on—rented it for the club’s headquarters in 1898 and 1899. One July Sunday, about 50 members of the club, spouses and lady friends enjoyed an afternoon on the veranda and lawn of the clubhouse. They also had a baseball game on the workhouse grounds.

By the turn of the 20th century, the economy had improved and an enthusiastic writer in the St. Paul Globe newspaper compared Warrendale to the land adjacent to New York City’s Central Park 20 years earlier and predicted the same type of appreciation in value.

Warrendale was on the move again, although more than half the lots were still vacant and it was several more decades before the development filled in.