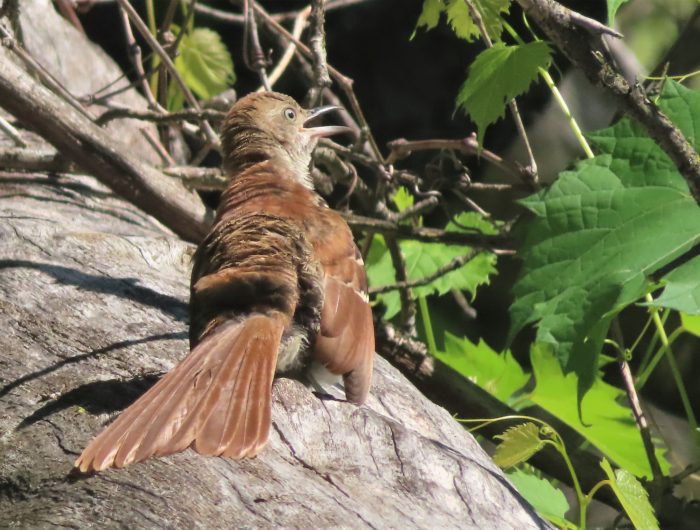 When birds make the most of ants!

Birds are usually moving around, hopping across the lawn, flitting from limb to limb in the trees and shrubbery, chasing one another.

So, when I see a bird just stretched out on the ground, I wonder, “What’s up?”

I was watching a robin walking along the curb one morning when it stopped, laid itself down on the curb, and spread out its wings. It stayed there for a minute or so, then got up and resumed its walk down the curb.

What was that all about? The bird may have been sunning. Exposure to the sun may kill feather-­degrading bacteria.

But I think the bird was “anting.”

There are several ant holes in the lawn along the curb. Some birds use ants to control feather mites. I think this robin was practicing passive anting, settling down on an ant colony and letting the ants crawl up into its feathers to have at the little mites. An anting bird often contorts its body, bringing its tail underneath, although I didn’t see the robin using that posture.

It’s not clear if the ants eat the feather mites. One theory is that the ant activity gets the mites moving to places where the bird can nab them and pluck them off their body.

There’s another form of anting called active anting. In this version, the bird grabs an ant and rubs it along its wings and tail, making use of the formic acid or other chemicals the ant exudes. It’s not a good experience for the ant! There’s some debate about whether formic acid affects feather mites or if it just feels good on the bird’s skin.

Birds prefer to select ants that emit chemicals in defense, not ants that bite or sting. There are some 24 ant species that are used for anting. One side effect of rubbing these ants along their body is that the bird gets most of the formic acid out of the ant and the ant becomes a tasty snack.

This whole process is an ant form of delousing. Get those mites moving so they come to the surface and can be picked off.

Formic acid rubbed on the skin might just feel good. There are studies on both sides of the issue. I bet it would tingle at least a little bit.

There is debate about the effect of formic acid on feather mites. The formic acid concentration in the ants’ solution is greater than 50 percent. It apparently kills lice and mites in the lab but has not been demonstrated on birds in the wild (source: Wikipedia).

On the other hand, David Allen Sibley, one of America’s most prominent ornithologists, writes in his new book “What It’s Like to be a Bird,” “Formic acid does not have any known effect on feathers or feather parasites. But birds also wipe other acids such as lemon juice onto their feathers, so it is possible that acid has some still unknown benefit.”

In fact, in the absence of ants, birds have been known to use many other things, such as marigold flowers, which contain the insecticide pyrethrin. I wonder how did the birds discover the insecticide properties of marigolds?

The list of skin potions for birds includes mothballs, citrus fruits, vinegar and still-glowing embers (!). Each produces a burning sensation.

Some of the other things that birds have used besides ants include garlic snails, beach fleas, millipedes, earwigs, caterpillars, grasshoppers, mealworm larvae and wasps. And lit cigarette butts! Some birds have carried flaming tinder to their nest in a building!

Imagine the insurance report that states that a bird set a structure on fire! Playing with matches? No, careless smoking!

There is also some debate about whether anting is a learned behavior or innate. It seems reasonable that each individual must experience it for itself, but they may watch others do it and decide to try it.

Authors Thomas Eisner and Daniel Aneshansley, in their “Anting in Blue Jays: Evidence in Support of a Food-Preparatory Function,” discovered that two of six blue jays that had never been exposed to insects, went immediately to anting on first being given an ant. That implies that they’re genetically programmed for anting behavior.

And the delightful and wise Laura Erickson, one of Minnesota’s premier ornithologists, in her book “For the Birds: An Uncommon Guide,” in the entry for July 14 notes:

“When Ludwig, a baby jay I once raised, tasted his first ant, he immediately spit it out and shook his head violently. Then he suddenly rubbed his tongue against the roof of his mouth, grabbed the ant again, and rubbed it against his wing and back feathers. Ants are laced with formic acid. Anting may be the avian alternative to bug spray, or the tingle of acid on skin may simply feel good. It seems Ludwig found that it felt good!”