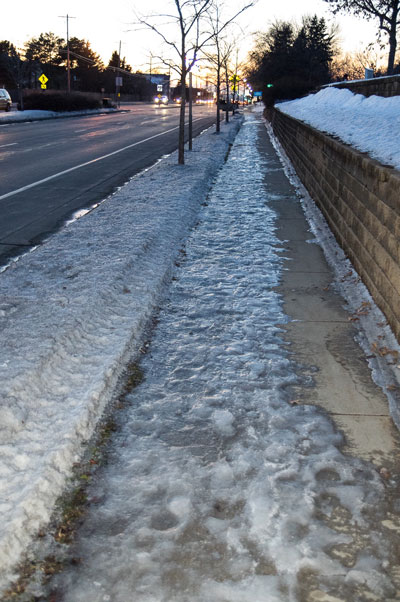 Who’s clearing the sidewalk along the Les Bolstad Gold Course?

It took a good part of the winter for the U of M Grounds Department to take over clearing the walkways on Larpenteur Avenue adjacent to the U of M golf course.
Photo by Steven Lang

For many folks in Lauderdale and surrounding communities, the sidewalk along Larpenteur Avenue’s Les Bolstad golf course, owned by the University of Minnesota, is the only way to get around. It’s a key east-west connection for anyone on foot or bicycle trying to navigate the neighborhood

But this winter it’s often been an icy mess, as the rules about who’s responsible for the sidewalk have recently changed.

“Larpenteur is the way through the neighborhood,” said Steven Lang, an artist and photographer who lives in Lauderdale and rides his bike on Larpenteur to get around in the winter. The ice has made it extremely difficult.

“Trying to get back and forth from St. Paul, there’s only one sidewalk on one side of the street and that’s the one. Earlier this winter, it was so much worse than it is right now. It was ridiculous.”

In an email to the Bugle, Brent Belanger, the superintendent for the golf course, explained the situation: “The City of Falcon Heights took care of the sidewalk until this year. They told us right before Thanksgiving that we would now be in charge of the task. We did not have it in our budget to buy the proper equipment to perform the task at hand. I was told by the university to hold off in the hopes of having them take care of it for one more year.”

That didn’t happen, and now the U of M’s Grounds Department is clearing the walkways along Larpenteur, Belanger said.

Just before the Feb. 2 snow storm that dumped nearly 10 inches of snow here, the U put down brine and began clearing the walk to prepare for the snow. And next year, Bolstad officials insist that they’ll have their own sidewalk-maintenance equipment on site to improve the situation.

“The road is used often enough by pedestrians, runners and bikers that it should be cleared,” Lang said. “I saw people struggling to get through there. They have no choice but to walk on the street.”