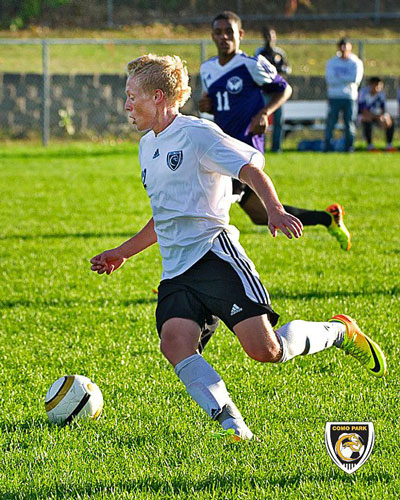 That’s fine. Kidd says he cares more about the awards he and his teammates have earned and are displayed in the trophy case at Como Park Senior High School than the personal ones he has received.

In Kidd’s four seasons of varsity soccer at Como, his team played in three state tournaments, winning three section championships, two conference championships and one state championship. He was voted captain for both his junior and senior seasons, and teammates, opponents, coaches and fans will testify that Kidd’s high energy and work rate is constant. He has a burning passion for the game, and it’s contagious within a team.

Where did it all begin? What inspired such hard work? What drives him to spend any free time he has with a soccer ball?

The short answer is the Kidd family, who resides on Doswell Avenue, up the hill from Speedy Market.

Bill and Cari Kidd didn’t grow up playing soccer. They liked athletics, and they promoted activity for their children, beginning with Emily (a 2007 Como graduate, now an athletic trainer at the University of Minnesota). Emily’s youth sports at Langford Park led to club soccer and frequent trips in the family van to games and tournaments all over the metro. Young Will was always in the van and on the sidelines with a soccer ball, emulating what he saw on the field.

Bill Kidd saw Will’s skills progressing and challenged him at age 10. “Juggle the soccer ball 100 times, and I’ll give you $100” is the quote Will recalls. It didn’t take long for the determined and competitive towhead to pull off this highly technical skill and show his dad.

Will claims he’s still waiting for his dad to show him the money.

From the van rides and the good-natured father-son wagers, Will’s soccer journey wound its way through Langford Park, local clubs, select teams, elite camps, Murray Middle School and onward to Como, where he ended up at the summit of Minnesota high school soccer.

Will is narrowing down college choices for next year, knowing he wants to study in a math or science field and continue to compete on the soccer field. Coaches from several NCAA D1, D2 and D3 schools have expressed interest, and he’s traveled to tour campuses and meet with coaches.

Kidd says he will definitely play soccer—somewhere—and that he’ll make a decision in the next few months.

Above and beyond soccer achievements and a bright future, Will Kidd is an unselfish and modest leader, who is adored by the Como Park Senior High School community for being first-class, on and off the field.