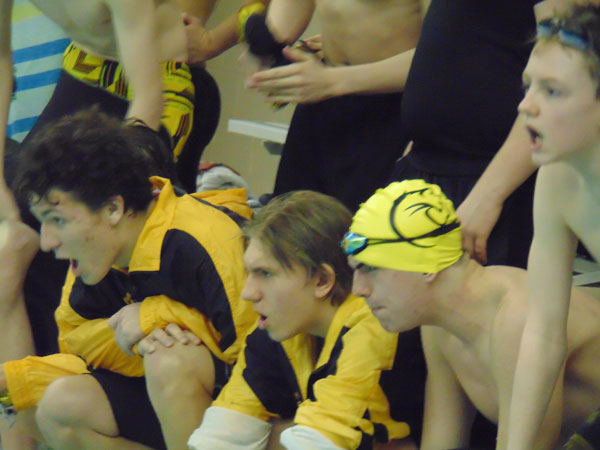 The 4 x 100 freestyle relay team of McCune-Zierath, Napierala, Czech and Miller swam the fastest time for Como in the last 15 years at the conference meet. The boys carried that momentum to the Section 4A meet at St. Catherine’s University Feb. 24. They had a goal of a top-three finish in the section, which would fulfill a dream by qualifying for the state tournament.

Executing a strong and steady clip, Coach Steve Conery and the Cougars celebrated as the team touched the wall in third place. Medals were awarded on the stand and Como was represented in the Minnesota State High School League swim meet on March 3. While there were no medals at state, the experience of swimming in the premier event was a reward. The 2016-17 swim season was a well-earned success, and with more miles in the pool, the goal of state will remain in place for next year.

Wrestling—Como coaches and alumni Tijl van der Wege (2002) and J Frasl (2010) led a young team, focusing on fitness and technical moves. Many wrestlers continued to improve and be competitive in the St. Paul City Conference.

Boys’ basketball—Academic accountability was top priority for the Cougars, as reported in the Bugle last month. Grade point averages improved across the program, and the team represented Como with high energy and effort on the court. Close games were common. The margins between winning and losing were thin, evidenced by 14 of the team’s 26 games being decided by 5 points or fewer. In those games, the Cougars were 5-9. The team’s overall record was 8-18, but the takeaway from this season was a commitment to school and being a student.

Boys’ hockey—As previously reported in the Bugle, the 2016-17 season was a new experience for the Como players who traditionally wore the black-and-gold Cougars uniform. The program’s merger with Johnson High School led to a consistent Top 20 state ranking throughout the season. The boys put together an overall record of 18-7-2 and advanced to the Section 4A semi-finals, where they fell to the eventual section champion Mahtomedi in an intense, close game.

Nordic skiing—The boys’ and girls’ teams trained together when snow was available at the Como Golf Course. To ensure practice over winter break, the team took a three-day trip to ski in Michigan’s Upper Peninsula.

The fastest skier for the boys this season was sophomore Antero Sivula, followed closely by junior Eli Pattison. They served as team captains along with junior Dominic Wolters. The girls’ team was captained by junior Eva Hanson, and seventh-grade phenom Saylor Landrum was the team’s top racer. The season was deemed a success: team participation was high, and parental support and fundraising were strong.

The team, which will not lose any skiers to graduation, has a bright future.Nordic skiing is thriving at Como and the Cougars are excited for next season.

The Cougars had a goal of returning to the state tournament after their debut in 2016; however, a loss to St. Anthony Village in the Section 4 semi-finals ended the season on March 4.

Junior Makayla Van Nett led the Cougars in scoring. Juniors Autumn Tucker and Raiyne Adams provided strong guard play, and sophomore Elaina Jones was a tenacious rebounder and defender. Seniors Asiza Sheperd and Aazhra’rae Jackson will graduate, but the team’s core will be back to defend their titles.

The Blades were the top team in a three-day holiday tournament in Austin over winter break, which helped this team of girls from different schools bond.

Gymnastics—Personal bests were set this season as Cougar gymnasts continued to improve. Senior Josie Schermerhorn competed in the all-around competition and was the team MVP. Sophomore Victoria Hartwich-Cedillo was voted most improved. Seniors Lizzy Larson and Rachel Ruskin both completed four years of participation in the program, providing leadership and demonstrating dedication.

The team was coached by Jill Bachmann and assisted by Marv Rouse. The coaches are looking to add new team members for next season and will be offering a program for community youth at Como this summer.

Wrestling—Just four wrestler returned from last year, but the Pilots took in a lot of eager participants and Coach Kirby Scull assembled a roster of 20 student athletes. The dedicated group improved quickly and ended the season earning second place in the city meet. Murray wrestlers who finished in the top three of their weight classes include Brandon Vue, Snow Ball, Johntae Hudson, Ryan Francisco, Kaelyb Sears, Kamp Ke and Sully Lucy. Individual city champions for Murray were Sergio Newell at 115 pounds and Asante Byakweli in the 135-pound classification.

Girls’ basketball—The Pilots were the undefeated St. Paul City champions, finishing with an overall record of 12-0. The girls were dominant on the court and also excelled in the classroom. The team was full of mature leaders and posted an overall grade point average of 3.0.

Coach Brian Pearson credits the team’s success to the contributions of every player. Several team members developed together in the last three years and took their game to another level as eighth-graders this season. Those players included Hannah Hausman, Morgan Nichols, Demya Riley, Iyanna Kelly and Mary Holm.

Boys’ basketball—With a younger team that was playing without some superstars from the past couple of seasons, the boys worked to improve and be a competitive team in the city. There were ups and downs, but growth definitely occurred and the improvement was evident with more wins in the last half of the schedule. The Pilots always played hard and represented Murray with their best effort. Team leaders included Jalen Thomas, Donovan Clinton, Dylan Aarness and Jarvis Atkinson.