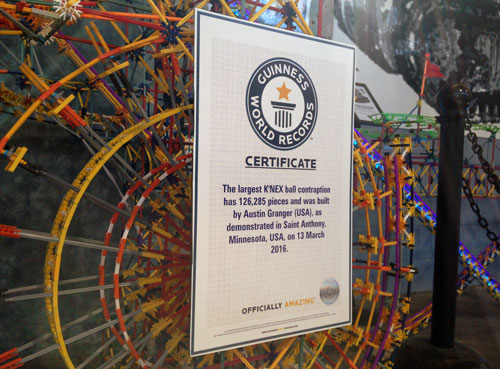 When Austin Granger began to plan the building of a K’NEX machine in Brickmania’s northeast
Minneapolis warehouse, he thought, “Oh, my god, how am I ever going to make something that fills this up?” Photos by Bill Lindeke

With 126,285 pieces, Austin Granger’s K’NEX ball machine is Guinness World Records-certified as the largest in the world, quite an accomplishment for a young man who began building machines with the plastic rod-and-connector building system as a child in his St. Anthony Park bedroom.

Today his massive contraption sits in a warehouse in northeast Minneapolis, circling the LEGO displays at the offices of Brickmania, a custom LEGO-kit company.

By the time you read this, the official number will be different, because Granger is always tinkering with the plastic pieces of his machine.

“It’s still a work in progress, and I’m working on it all the time,” says Granger of his always-evolving structure.

Granger’s “ball machines” use the plastic trusses and tracks to create looping tracks on which balls roll around. It takes each ping-pong-sized ball on Granger’s record-breaking machine more than six minutes to complete the course.

The machine requires both meticulous planning and an artists’ feel for improvisation and creativity, and Granger has both in spades.

Now Granger works for Brickmania, a 15-year-old company that makes custom LEGO sets, often with military themes. After videos of Granger’s K’NEX machines built in his parents’ St. Anthony Park home went viral on the Internet, he caught the eye of Brickmania founder Daniel Siskind, who hired him to build a custom machine in Brickmania’s warehouse offices. With a generous budget and a cavernous former-factory setting, Granger spent the next six months working full time, planning and building the machine.

“First, I get a sense for what space I’m building in,” Granger said. “This is by far the largest space I have to work with. I thought, ‘Oh, my god, how am I ever going to make something that fills this up?’ So I started building the truss framework that you see everywhere. I kept adding it on to give me a skeleton, and then started adding these lifting mechanisms and tracks wherever I had room.”

The result leaves you wide-eyed. The size itself is almost impossible to comprehend: On one wall, the machine runs along beams 20 feet in the air before crisscrossing along a rafter. Small plastic balls constantly glide along the winding multi-layered tracks, clicking and clacking in an almost-meditative high-pitched sound that reminiscent of rain falling in fountains. As the machine settles along the far wall, it becomes impossibly complicated, a series of motorized elevators, conveyor belts and interchanges that end up depositing balls in a vast wishing-well–style whirlpool where dozens swirl around at once.

And like a life form or a city, it’s constantly growing and adapting.

“One thing I really love is the challenge of how do you work on something like this without interfering with its functionality,” Granger explained. “When I’m here at the open house, I try never to shut it off. Even if I need to take a track out, I do it with as little interruption as I possibly can.”

The largest single part of the structure is the bridge along the east side of the room, which Granger modeled after a dual-suspension bridge in Pittsburgh. Like any good civil engineer, Granger’s 20,000-piece bridge is redundant and can hold more than three times its weight. It took the seven people working to elevate it into place 40 feet in the air.

“It’s a very rubbery plastic,” Granger said, describing the K’NEX rods. “It’s this rod-and-connector system like a Tinkertoy, so the way the geometry is designed, it’s really good at making triangles and truss-type shapes. It’s capable of more free-form curves, but it’s a bit more difficult, and you have to bend and stress the pieces a little.”

The complexity and material quality of the structural members is one reason why Granger is constantly maintaining the machine. Occasionally entropy strikes, balls pop off or tracks dislodge. But the result is a world-record accomplishment.

“This is actually the first time anybody has tried to get this world record,” Granger said. “Not having to verify against anybody else, if anybody wants to come along and break this record, they have to compare their piece count against mine.”

Even before he began building the machine, Granger had his eyes on setting a world record. As he ordered the machine’s thousands of pieces on eBay, he used highly sensitive scales to count them. When the Guinness record-keeping team reached out to him, he was ready with careful videos and accounting details, enough to guarantee his record as having the largest K’NEX ball contraption in the world.

“I started from the ground up with the intention of being a world record,” Granger explained. “The budget was large and the size I had to work with, I figured it should be pretty easy to make a world record with this.”

He corrected himself. “Well, it’s not easy, but it’s feasible,” he added, acknowledging the size of the machine.

You can see the machine during Brickmania’s open hours, the second Saturday of every month. Brickmania is located at 1620 N.E. Central Ave. Granger is likely to be there working on it. It offers a rare chance to see a genius in their element, creating something awe-inspiring.