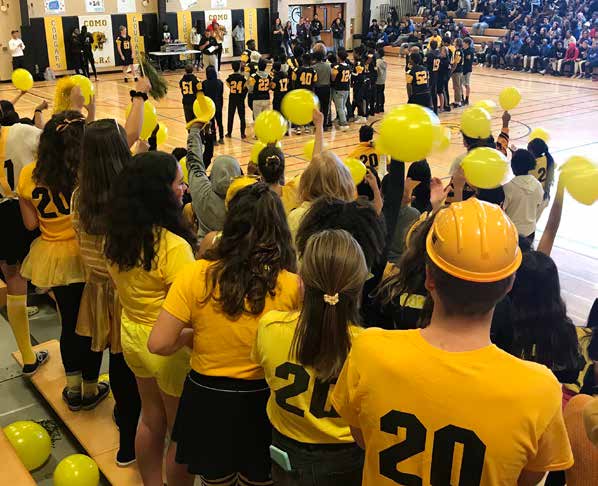 The first months of the 2019-20 school year have flown by as has the fall sports season. For Como Park and Murray student athletes, the time spent with teammates and coaches pursuing shared goals enhanced their educational experience.

For a glimpse of student highlights and accomplishments, the Bugle offers a summary of each Como Park Cougar varsity team and every Murray Pilots program.

Football—A young team with only four seniors faced challenging competition in the Twin Cities District City Blue Division. The Cougars began the season with six straight losses, but then rebounded with a memorable come-from-behind victory during a snowstorm at Minneapo­lis South.

The Cougars came from behind in the fourth quarter to force overtime. Quarterback Stone Frasl ran for a touchdown in the second overtime to secure a 12-6 victory and set off a euphoric celebration.

Boys’ Soccer—The Cougars played at an intense pace and used their speed and skill to notch signature wins over St. Croix Prep and Austin, who were both state tournament qualifiers. Como also defeated Washington in the Rice St. Rivalry Game, and dramatically claimed the Mayor’s Cup at Humboldt by beating the Hawks 1-0 in overtime.

Overall, the Cougars completed the season with a record of 10-7-1, finishing 7-5 in the St. Paul City Conference.

Cross Country—It was another successful season for the boys’ and girls’ teams that both placed third in the St. Paul City Conference. In the eight-team Pike Island Invitational, both teams placed first, with senior Alistair Pattison crossing the finish line first in the boys’ race.

Volleyball—The Como girls’ volleyball team rebounded in 2019 with the varsity improving on its 2018?? record by eight games, finishing 13-8 for the season. The Cougars’ 8-4 conference record netted them a third-place finish.

Season highlights included a thrilling five-set victory over Central in front of an energetic home crowd, and an eight-game winning streak during the second half of the season. Senior setter Anisa Smith and junior outside hitter Hannah Hausman were recognized as all-conference. Senior middle hitter Carter Brown received honorable mention.

Girls’ Soccer—The Cougars had a historic season, winning the St. Paul City Conference championship for the first time since 2005. In the playoffs, Como advanced to the Section 4A semifinals and finished with an overall record of 12-4-1.

Shar Too finished her four-year varsity career as the conference’s all-time leading goal scorer, earning first team all-state, and being named a finalist for the Pioneer Press East Metro Player of the Year.

Girls’ Swimming—Como and Johnson high schools continued their co-op program and placed third in the conference dual meets. With the Como pool unavailable due to construction for the season’s first five weeks, the team held its practices at Johnson.

Volleyball—After a 10-1 record and second place finish in the regular season, the Pilots flipped the script on Highland in the conference tournament to claim the city title. Murray won the final match in straight sets and ended the year with a high note.

The team’s accomplishments came from a positive attitude, great work ethic, steady improvement and unselfish playmaking. Ultimately, the team played its best when it mattered the most.

Girls’ Soccer—The Pilots finished tied for second place in the city with a 6-1-1 record. Captain Ava Lopez was a highly skilled player and a great communicator who led the team in assists. Captain Kora Becker did anything she could to help the team including playing many positions and helping less experienced players.

Boys’ Soccer—The Murray boys finished in the top half of the city conference with a 6-4 record. Captains Abdullatif Alhumam and Alex Sandoval Soto provided excellent leadership along with the entire eighth grade class, demonstrating teamwork and commitment that served the team well against challenging competition.