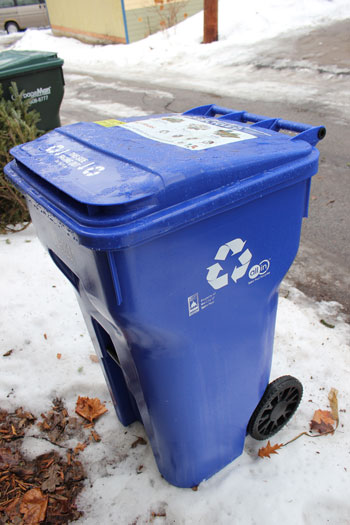 Yes, your recycling cart does have a microchip

Imbedded radio frequency identification tags are in all the new recycling carts that rolled out in St. Paul in January.

Correction: The article below incorrectly states that the Radio Frequency Identification tags imbedded in the City of St. Paul’s new recycling carts were used to track delivery and placement of the new carts. Bar codes were used for that purpose. The RFID tags were not and are not being used in any way, according to Joe Ellickson, St. Paul Public Works Dept. communications director.

Imbedded radio frequency identification (RFID) tags are enabling the City of St. Paul to keep track of the 80,000 recycling carts it w recently purchased for use by Eureka Recycling.

This means linking carts to specific addresses, including those in the Como and St. Anthony Park neighborhoods.

(The carts that Lauderdale uses for Eureka service already contain RFID chips. Tennis Sanitation, the recycling contractor for Falcon Heights, did not respond to Park Bugle inquiries about its carts.)

Nationally, some civil libertarians have raised concerns that the cart technology could be used to determine who is and isn’t recycling. The Park Bugle could not confirm that that has occurred anywhere.

“The RFID tags were used by the cart company during delivery for inventory purposes, but they are not connected to our collections in either St. Paul or Lauderdale in any way,” said Lynn Hoffman, co-president of Eureka.

The City of St. Paul made a substantial investment—$3.8 million—in an effort to rejuvenate its recycling program, and a large portion of that went to fund the new carts. City officials say they have an obligation to manage these assets responsibly, being able to identify a cart if it is damaged, lost or stolen.

A spokesman for the St. Paul Public Works Department said that a city task force selected the RFID-imbedded design because it has become the industry standard. If St. Paul ever decided to expand its use of it, the carts wouldn’t have to be retrofitted.

“But there would be an extensive public process and the passing of an ordinance before that could happen,” said Joe Ellickson, department communications director.

City ordinance requires residents to recycle, with a $25 fine for noncompliance, but nobody in Public Works can recall the statute being enforced, and the department has neither the budget nor staff to do so.

Ellickson estimates that 75 percent of St. Paul households recycle at least once a month. With fewer newspapers being collected and lighter materials, recycling tonnage has been flat in recent years. It is hoped that the new carts and acceptance of additional materials for recycling will increase participation and collection volumes.