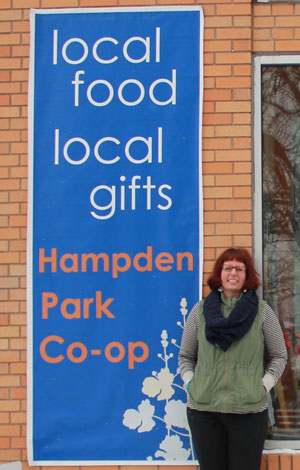 Road and sewer-repair projects virtually shut down Raymond Avenue outside the co-op (located at 2382 Hampden Ave.) through the summer. Consequently, sales at the 44-year-old natural foods store were down 10 percent in 2015.

Raymond Avenue will be closed from Como Avenue to Energy Park Drive for several months starting this spring for the third phase of the Raymond Avenue Traffic Calming Project, which began in 2013. Facing another spring and summer of road construction hindering traffic near the co-op has the new manager thinking strategically about how to get more people into the store.

“We are working to make the store more inviting,” she said, “and we continue to expand our prepared foods. Our lunches are amazing.”

Lunch is a bustling time at the co-op, as many area workers come in to grab soup and deli items and local musicians play several days a week. “It’s good energy,” Nicholson said, adding that she plans “to expand it into other parts of the day.”

“A fun secret we have is our breakfast burritos, (house-made) scones and croissants from Solomon’s Bakery.”

Nicholson has been in the natural-food business for 21 years. “I have co-op in my blood,” she said. She spent the last eight years as a project manager and operations manager at Mississippi Market Food Co-op on Selby Avenue before coming to Hampden and worked at the Wedge Community Co-op in Minneapolis for 13 years before that.

She knows that many of the competing food cooperatives have gotten bigger with more offerings, so Hampden Park is “renewing our efforts to connect with our members.” To that end, the co-op reinstituted mailing its monthly newsletter to its members starting in February.

She also wants to get the word out that shopping close to home is a good way to put your mark on making the world a better place.

“There are some scary big things in the world,” Nicholson said. “For me, I ask how can you find the place where you can be the one to change the world? Shopping at a place like the Hampden Park Co-op is how you manifest that change, and I believe that’s why we’re here.”