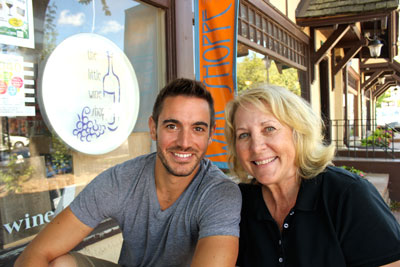 The Little Wine Shoppe, 2236 Carter Ave., has a lot in common with the fictional Boston bar in the 1980s TV sitcom Cheers:

Everybody knows your name.

They know your kids’ names.

They know your dogs.

And they know which wine you tend to go for, not that they don’t strive to help you explore new territory.

Looking for the right wine to go with those brats grilling in the backyard on a late-summer evening? Tim Hausmann, a certified sommelier who works at the store three days a week, suggests the Italian Weissburgunder Pinot Bianco. It’s a great accompaniment to any kind of sausage, he says.

Burgers, steak or any other red meat? Try the Dancing Coyote Zinfandel (we’re talking red zinfandel). “Across the board, [zinfandel] is a crowd pleaser,” Hausmann says.

Something to sip out on the porch on these waning summer days? Rosé, both Johnson and Hausmann agree. They have several to choose from, and chances are the wine you buy will be a small-production bottle from an artisan winery.

Case in point: Les Brebis Pinot Noir from the Willamette Valley of Oregon, a low-tech winery that produces just 300 cases of pinot noir each year. The small label describes its winemaking as “more about what we don’t do than it is about what we do.”

What Les Brebis doesn’t do is add commercial yeast, allowing the fermentation to start spontaneously with the wild yeast that is naturally present in the grapes and in the wine cellar. You won’t find Les Brebis at the big retailers, Hausmann says. The winery is too small. “It’s off their radar.”

“We try to gravitate toward smaller, lesser-known producers because their wines tend to be more handcrafted and much less commercialized,” Hausmann says. “It’s important to us to support smaller operations. We feel they are more often in the business of winemaking because they have a passion for it, not just to make money.” If there is a particular wine a customer would like the shop to carry, they will do their best to stock it.

Keeping a small wine store competitive in the Twin Cities is no easy task when the competition includes billion-dollar out-of-state corporations that can bring customers into their stores by advertising well-known national brands at or just above wholesale costs.

Johnson’s strategy is to promote smaller wineries, local distilleries—including Gentleman Scholar, Norseman and Solveig—and as many local beers as she can fit into her cooler. “Just ask,” she says, “we’ll get it for you.”

And shopping close to home is more than just convenient, Johnson says. “We are the antidote to the big-box store. We are the neighborhood wine cellar. We are convenient and we give back to our community.”

The Little Wine Shoppe was one of the sponsors of the St. Anthony Park Garden Club’s 2015 Garden Tour and a supporter of the Fourth in the Park celebration in July and the St. Anthony Park Community Foundation. Johnson also donates to the local schools and other neighborhood institutions, uses a local accountant and seeks legal counsel from a local attorney.

And, yes, you can buy Kim Crawford Sauvignon Blanc for less than what the Little Wine Shoppe pays for it wholesale at that-wine-supermarket-that-shall-not-be-named, but sometimes the neighborhood store can be the bargain.

Recently, a regular customer inquired about purchasing a large amount of wine for a birthday celebration. Johnson crunched the numbers at her shop and at a nearby big-box retailer. With the volume discount she gives on cases, the customer saved money by purchasing the wine through the Carter Avenue store. The shop offers a 10 percent discount on a case of wine and a 15 percent discount on the purchase of two or more cases. But something the Little Wine Shoppe offers that most big-box stores don’t is this: The cases can be mixed. You don’t have to buy 12 bottles of the same wine.

The shop holds a wine-tasting the third Thursday of each month for customers to sample new wines coming into the store. The next tasting will be held Sept. 17, from 4:30 to 7:30 p.m.